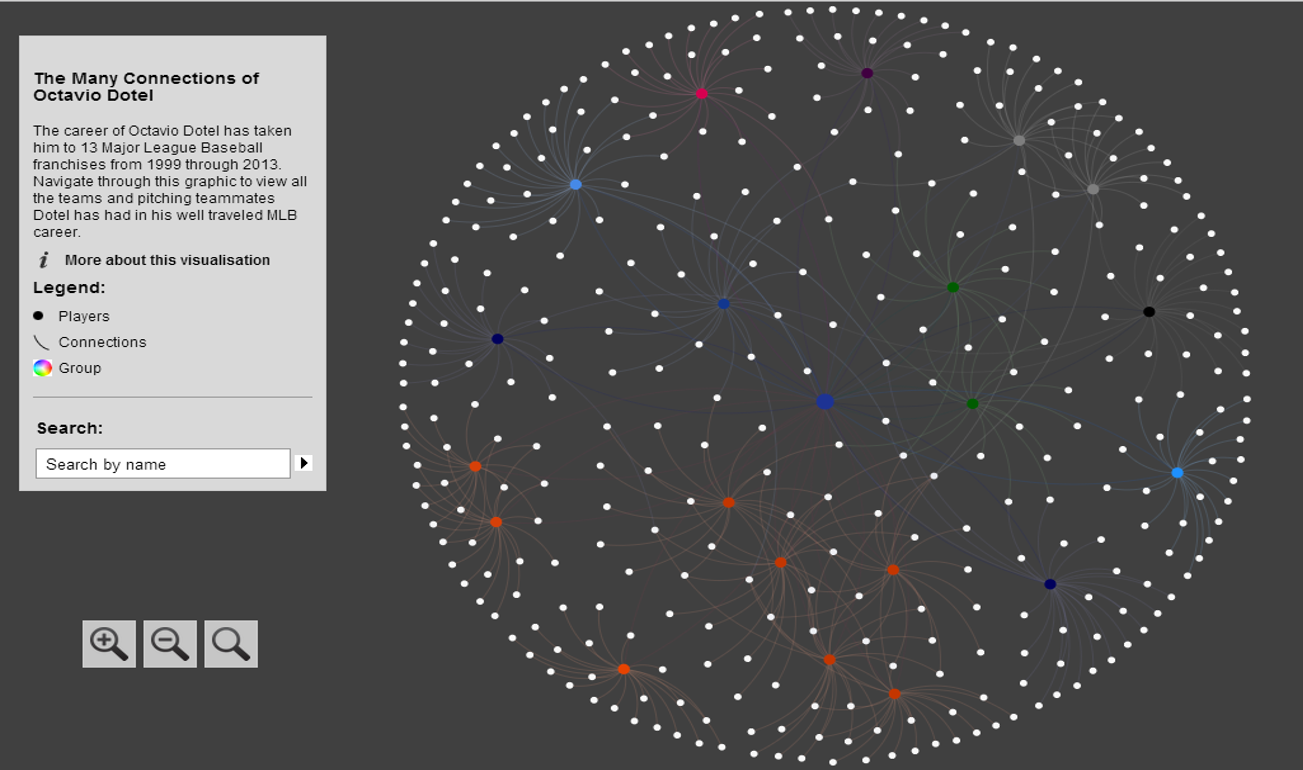 For whatever reason, I recently had an epiphany about creating a data viz that would track the career of Octavio Dotel, the veteran pitcher who has managed to pitch for nearly half the franchises in Major League Baseball. Between 1999 and 2013, Dotel pitched for no fewer than 13 teams, including multiple seasons where he pitched for two or even three teams in the same season. No shortage of potential angles for this one – number of teams, number of other pitchers he pitched with, how many of his former teammates are still active, etc.

After a few days of thinking about this, and making sure my data was up to date, I finally began creating a graphic using Gephi, the open source network graphing tool I recently authored a book on. Over the course of several posts, I’m going to share what could be considered (if I were an artist) as sketches leading to the final work.

So here comes the first ‘sketch’. Given the desire to create a graphic that is easy to view digitally (as opposed to a print version), I quickly determined that an algorithm that created some sot of circular graph would be best. After some experimentation, I chose the ARF (Attractive and Repulsive Forces) method using Gephi. Like many network algorithms, ARF draws similar nodes together while pushing unrelated nodes farther apart, resulting in a graph that is not only visually striking but also quite intuitive. I’ll talk more about that as the graph evolves toward a finished state.

With that said, here’s the initial take: Now, for some explanation of what you’re seeing. In the center (the largest blue node) is Octavio Dotel; since the graphic is about his connections, it’s only fair he gets top billing. The next level of nodes are depicted by slightly smaller circles. These represent each of the teams Dotel has performed for, with a single node for each season. The teams are color coded to resemble the actual team colors. If you look at the top center of the graphic, you will notice five identically colored circles, covering the five different seasons Dotel toiled for the Houston Astros, from 2000-2004. Most of the teams will have just a single season, while a few others have two.

Beyond the team level, you will see a few hundred smaller nodes, each one representing a single pitcher Dotel crossed paths with over the course of his career. Some of these nodes will be positioned between teams, indicating that a pitcher was part of multiple teams with Dotel.

As I continue to work on this, I’ll add some notation, reference salient features in the graph, and do some additional color coding at the pitcher level. Stay tuned.